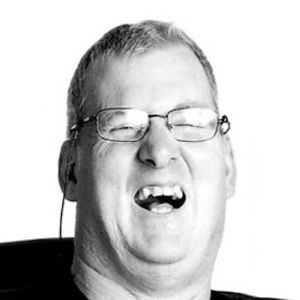 Greg is probably the most out-there man with a disability on Melbourne’s gay scene. Although he has cerebral palsy, Greg is a regular fixture at both venues and community events. Here Greg discusses his sexual experiences and how his disability affects his life as a gay man.

My first experience of the gay world was when I went to the Xchange back in 1999. The first thing I went to was Le-Gore’s Backyard, which was a bit of an institution back then. Before that, I knew I was a gay man but I never said to myself that I’d do something about it.

I think that’s because at that time I was in an institution - and the institution would not accept me as a gay man, because back then – this was in the 70’s and 80’s – people with disabilities were seen as asexual. I’ve got cerebral palsy.

I went to the institution back in 1975. When I was fifteen there were two boys there who I thought were pretty cute. Even back then I knew something was going on. I think one thing that helped me coming out was a TV show called ‘Number 96’. It was the first program that had shown a gay relationship on air and it was good to see gay characters on TV, but it was pretty lame.

Then in 1989, one of the people working at the institution put me in contact with a person who used to work at the VAC, a guy called Bill O’Loughlin. He was a counsellor there and very helpful. He put me in touch with a group called Gay Now at the VAC. I did that course with other gay men. I felt accepted in that group. We still keep in contact. (Peer education workshops)

It took them about four years to accept me. I have three brothers and one sister. I am the only gay one. At one stage I thought my brother might have been gay too but he now has three kids and is freakily happily married.

I get around to a lot of community events and now everybody knows me. In 1998 I went to Midsumma. I went to everything! Street party was good. Once, I was stopped from entering a gay venue – they said they I might run over people’s toes in my wheelchair!

I went to Porter St (sauna) and I saw this fucking gorgeous young boy. He said, ‘Do you want to do it?’ and I said, ‘Yeah, why not’. I put a condom on, but he fucked me more than I fucked him. It was a good experience.

I just turned up at the door and they let me in. The staff helped me into the spa and I did the rest. Now I have a friend who helps me when I go to venues. He actually works at Porter St and he’s really helpful. I go there about once every two months. (Saunas)

There aren’t really any sexual activities that I can’t do because of my disability. Sucking cocks, hand jobs – I maybe jack off a little too often! Mainly I like to bottom.

I have sex about nearly every six months. There have been times when I have really wanted sex and I haven’t been able to get it. That’s more about my disability than about my sexuality. I’ve thought about hiring someone for sex, but being on a pension it’s too expensive.

I’ve had a few relationships but they’ve been very far and few between. That seems to be a common thing in our community. My relationships have mainly been with other people with disabilities.

It’s difficult for two people with disabilities get down and dirty; they need people to help them – the right people! We need help to get undressed and into bed together. But in every situation there’s a way to have sex - and safe sex. I can put a condom on myself.

I’ve had sex with a woman once. That was someone who was very special but it just didn’t feel right.

Once, I was at The Peel and there was nothing happening so I decided to wait for the train at Collingwood Station – even though it was only about three in the morning. The station was completely deserted until this guy came up and propositioned me. I think he followed me from the Peel.

He asked me if I wanted a fuck. I said no – he just didn’t seem right to me. He put his arm around me and I felt pretty uncomfortable. I yelled out and somebody came to see if I was OK. I generally feel pretty safe now but in the early days I didn’t: I have more self-confidence now.

Good sex for me is me having reasonably good control of the situation and me just knowing where we’re going and how we’re going there. It’s important that both people experience pleasure because we’re both in it for a good time.

I’m seeing someone at the moment. The relationship’s been happening since March. I met him at Access, a disabled and sexuality group. He’s also disabled. He’s got cerebral palsy also but he can walk.

We both live in special accommodation. We can’t have sex at my place – well, we’re not banned from having sex on the premises but I don’t feel comfortable doing it there - and his place doesn’t have disabled access so I can’t get in. We’ve been meeting at beats. We’ve seen each other about three times. (Beats)

I became aware of issues around sexual health and HIV prevention mainly from the gay media. At the time it was the Melbourne Star Observer. Once a year I go to the Prahran Market Clinic for sexual health testing. I am HIV negative. I want to be there as a leader in the disability area for a long time, so I have to protect myself. I just get an annual HIV test; I don’t get STI (sexually transmitted infections) tests. I don’t need all those other tests because of the amount of sex that I have. (Sexual health checks)

I know a few HIV positive people. A few years ago I had an acquaintance with HIV and he died. That was in the early days.

I do try and develop a community, but the disabled gay community has a long way to go. Most disability organisations are so fucking conservative because they were started by parents with the old protective attitudes. They’re slowly changing but there’s still a long way to go before they’re in the 21st century.

I’d guess that half of my friends are gay. I would say ten percent of my friends are both gay and disabled. I see myself as a bit of an advocate. I think maybe gay men may become more socially aware of other issues as well because of their own situation.

Building a better rapport with the gay and disabled communities is important to me. And one day I want to go to San Francisco and experience life there.