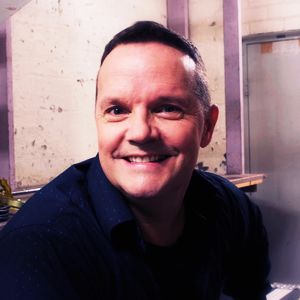 I treat Dolly with respect - I want her to be taken seriously.

This story relates to: Coming out

I Want To Be Famous

I grew up in London and when I was 12, my family and I moved over to Melbourne. I was one of four children and my childhood was really pretty good. My mum and dad, who sadly are no longer with us, were really great. My dad was a Sargent Major in the Army so he was sort of strict but not in a mean way. You did what you were told most of the time, bearing in mind I was cheeky and would answer back, but that didn’t always work. Mum was a stay-at-home mum and she was amazing. I was a horrible little show-off when I was younger and loved getting involved in musicals and choirs. My parents were very behind it and encouraged every bit of it. They would wheel me out at parties (not literally) and make me sing in front of their friends. It was a good childhood!

That whole wanting to get up and perform in front of people, I think you’re born that way. Once you realise that people like what you do, the laughing and the applause become addictive. I remember growing up seeing pop stars like Madonna or George Michael and thinking, ‘I want to be that famous.’ 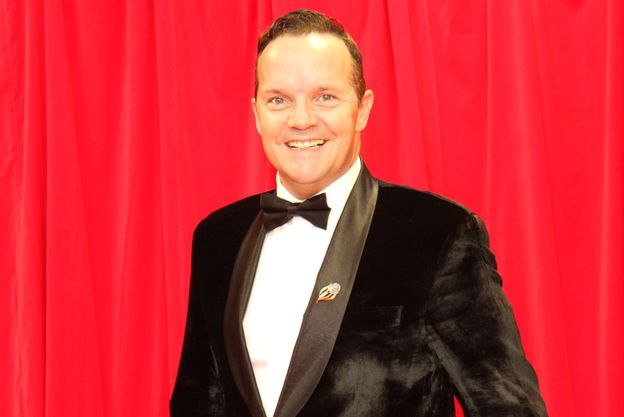 The thought of going to Australia and moving to Melbourne was exciting when I was young. In high school I did go out with a few girls. I don’t remember any significant moment where I realised I was gay but I definitely believe that you're born gay. It comes into your mind that you're more attracted to boys than you are to girls.

I had my first sexual experience when I was quite young and living in England. It was with my next door neighbour (nice and convenient) and in a rural open field... I might be romanticising a little. He'd done stuff before and was only a few years older than me but I hadn't and it was just experimentation really. There was no mention of it as sex or anything. It’s only when you look back and put two and two together do you realise there was a sexual element or something that was gay, but at the time it was just experimenting.

I never ended up doing that. Moving to Melbourne it was different – if you had ever masturbated you were a gay/faggot.

When I arrived at high school in Ringwood I looked completely different to most of the other kids, with a short crew cut, whereas everyone else had long hair. I didn’t have uniform and a I had a really strong British accent. I had no real intention of losing the accent or blending in. I was happy to be the one who was different, but I wanted to be friends with everyone as well. Not different and a rebel, just different and liked (adored). I was a novelty and that was fun, but my brother who was three years older than me (still to this very day) just wanted to blend in immediately and didn't want to be different. I remember the school bully having a real go at me and me not being remotely afraid of him. He was physically aggressive and said to me that if I stick around long enough, I’ll learn that he was the top dog, that sort of shit....very PRISONER. (Bullying)

I really enjoyed High School. They did musicals each year which I would get involved in and loved all the singing. I got called ‘poof’ a bit at school, but then so did a lot of other kids. That’s just the way it was, I didn’t feel victimised as such. It was the same as ‘wog’ and ‘dickhead’ to the kids. I don’t think back then that when a kid called someone a “poof,” they think of two men having sex. Although, now that I think of it, I suppose they were right weren’t they? There must have been something in the water because a lot of kids from that school turned out to be gay.

In school I did date a few girls. I didn’t do it as a cover-up, it just seemed to be what you did. I actually did like the girls and I liked having a girlfriend, but I think once you realise you’re gay, there’s no going back (so to speak).

I had come out to my mum in our yellow kitchen when we were living in Melbourne. I had mentioned to her about my friend being gay and she asked, “what about you? Are you gay?” I said, “do you want to know the truth? Yes, I am.” She responded with, “well, you’ll have to tell your father.” I asked her if she could do it instead but she insisted I did it myself. ]

So I told my dad and he wanted to know what I had done sexually to figure out how far gone I was and I said, “I’m pretty far gone.” It was actually a very funny moment but obviously emotional. It’s going to be emotional talking to your parents about your sexuality.

When I look back, it wasn’t actually that difficult but when you’re in the moment opening up, it feels like it is. I think mum was more affected by it because she said, “you’ve chosen a really difficult life for yourself.” (Coming out)

My parents were more worried than anything. I mean they disapproved just as we disapprove knowing anything about their sex life. I had no desire to really know about anybody else’s either. They had just felt that I was never going to get married, never have children (I've done both) and that I would be vilified my whole life, especially back then. Love and support brings you through most things. I know that sounds like a bumper sticker, but I mean it.

After school I went to drama college for a couple of years and then joined a vocal group who I performed and toured with. At drama college I met a girl who was a lesbian, who told me I was gay and ended up becoming really good friends. In fact, we ended up having a child together 20 years later which I will get into later. 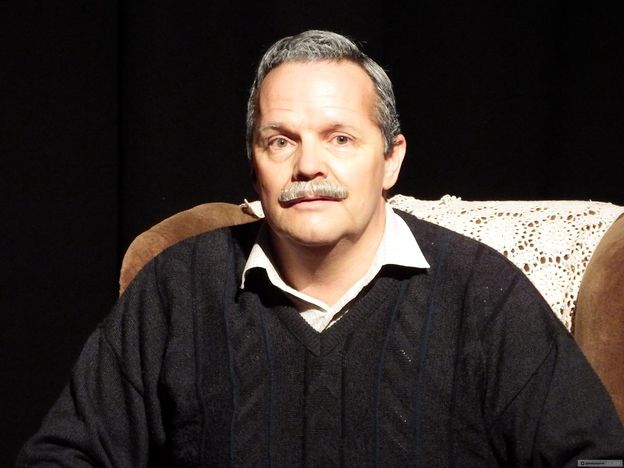 When I moved back to London I was doing musicals and working the gay circuit as a male vocalist. It wasn’t bad money, you’d do your show for an hour and get paid but the real money was in drag. I figured I may as well give it a shot as everybody said I’d be good at it and I wanted more work. I could be rude, sarcastic or funny to an audience as a drag character. You’re clowning as a performer and it’s very different to just being yourself.

I went out and I bought stuff such as shoes which were only an inch off the ground because I wanted to start off sensible. I also bought a sequined jumpsuit and a short black wig which looked very Liza Mineli. I was doing a male character called Mikey Diamond and I had always loved Dolly Parton, so I just put the names together and that’s how I eventually came up with Dolly Diamond. 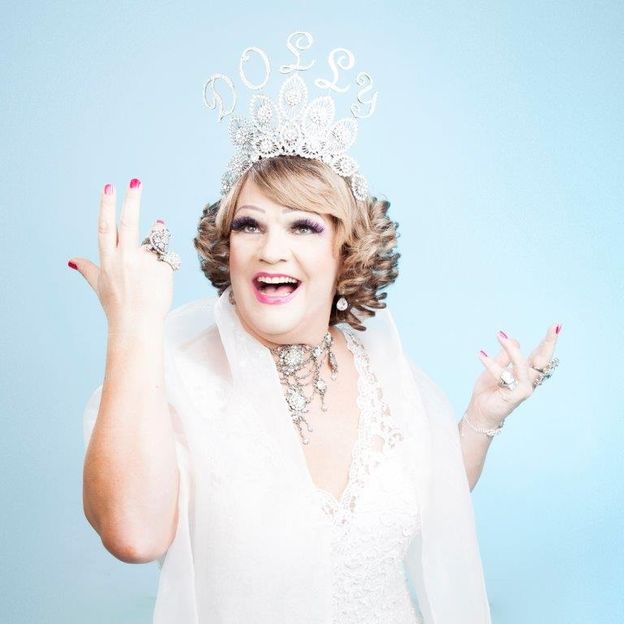 Dolly evolved into the look I have now because everyone kept saying, “you look like Liza.” I thought, ‘well I’m not Liza, I’m Dolly.’ I do Dolly because it got me work and I love doing it. I always tried to treat Dolly with respect because I wanted her to be taken seriously, but also I wanted myself to be taken seriously. Dolly is very much her own person and her own character, but it all comes down to the performance. I love being Dolly and seeing people’s reaction. I love the laughter and the entertainment. I love the applause – it’s like a bit of a drug.

There was a little while there where I would enjoy having quite a few drinks before I went on and it meant that by the time I went on, I was a little bit drunk. A friend said to me, “I think you shouldn’t drink so much when you’re performing because you’re doing yourself a disservice. You’re not as funny when you’re drunk.” I obviously didn’t like listening to that but after a bit of thought, I realised she was right.

Whenever someone asks me, I’ve always said, “I’m not a drag queen, I’m a cabaret performer or an actor.” Drag queens often stereotypically do hen’s night and mime and years ago there was sort of tacky element to it.

That tends to be how a lot of people perceive a drag queen. I think that's changed a lot over the years though. I sing live and stand-up comedy. I guess I try to distance myself from the word “drag” and want to be considered a comedian. 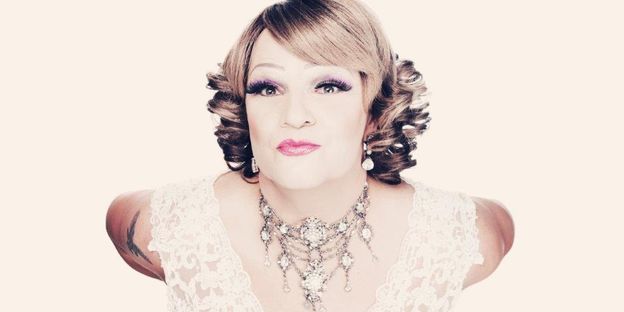 Getting ready for stage starts with the makeup where you flatten down the eyebrows with wax and draw in eyebrows above them. My makeup in the beginning was pretty average and I got a bit of friendly criticism but to me Dolly was a bit more normal in that way. It’s normal makeup a woman would wear (just a lot of it) and I don’t do crazy contouring on the cheekbones because I want Dolly to look like a woman. Often I get told that I look like the mother of the bride and I’m alright with that. It means I’m a bit Mumsy that's okay. I know how to do stylish & glam too, depending on what I wear but that’s Dolly after all! She’s in her 40-70's and just a normal woman – well not that normal! She’s old school show business!

When I am prepping to go on stage there isn’t any need for me to get into character or anything. I get more into performance mode than Dolly mode if anything. I’ve been doing it so long I just instinctively do it as I get ready to enter the stage; I never just quietly walk on.

My friend had come over to live in London and I have always said I wanted to have a baby. She said to me, “should we have one together?” She had a partner whom she’s still with and they raise our daughter together. We tried it via in vitro and then at home and it worked the first time.

My daughter is nearly ten years old. I feel really lucky to be her father, I’ve always known I wanted to have a child and this was the best way to do it. My mother never got to meet her, but my dad did.

We are very open with her and she knows everything. I think about six year ago she came to Daylesford and she watched Dolly go around the parade and it was very emotional for me. I was a little bit embarrassed as I just wanted her to have a normal dad I guess. I don’t know whether I wanted her to have a dad that dressed as a woman. I was just worried for her and worried of what she’d think or how she’d deal with it. I got over that and now all I am is proud.