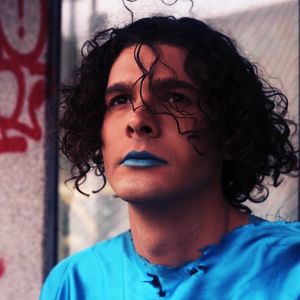 My mum is Italian and my dad is Australian, but growing up in Adelaide, I felt there was such an Italian influence over my upbringing. There was always a banquet of food and lots of coffee. When we had family get-togethers, we wouldn’t all fit in the house, so we’d be in someone’s driveway with a long table, covered in bread and wine, and so much food everywhere. 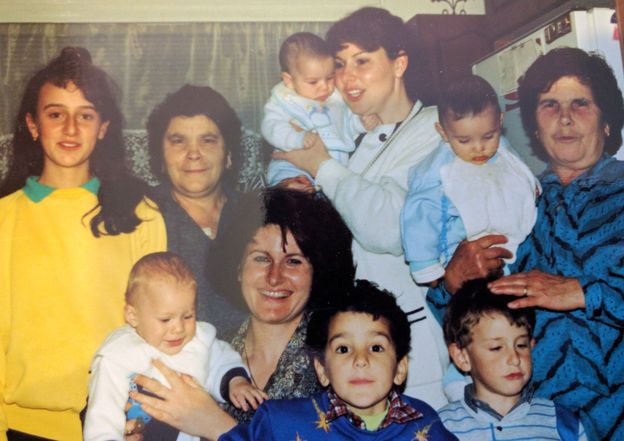 There was always such a strong smell of coffee too, and to me it’s such a beautiful smell. It reminds me of my family. I smelt the coffee all the time and I remember when I was about four, I kept pestering my Nonna to let me try some coffee and she eventually did. It was really strong! Those are such significant memories growing up. 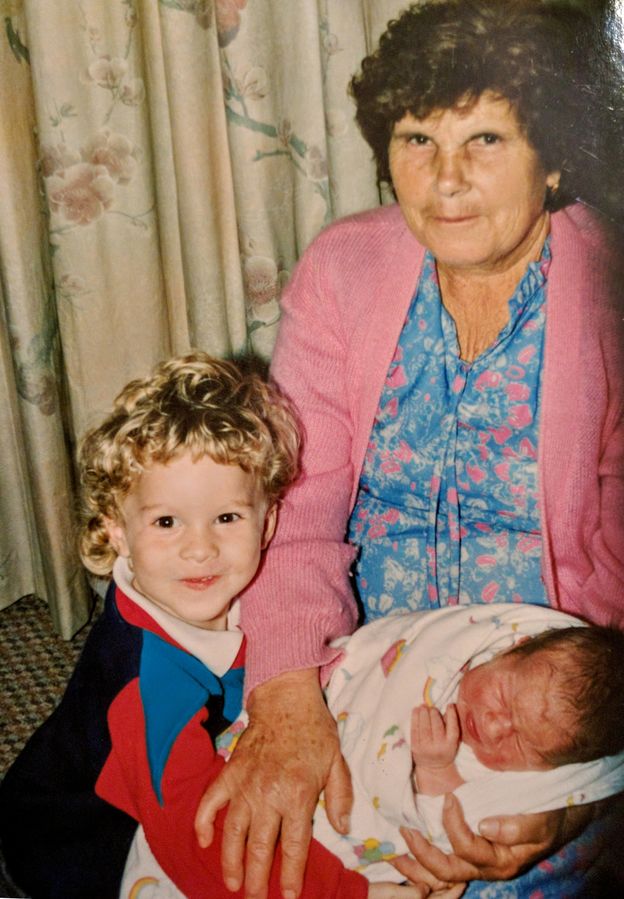 My Nonna, my little brother and I.

I was bullied a lot in primary school and called gay a lot. I didn’t really understand what it meant, and I’m sure neither did the other kids. (Bullying)Bullying was just so common that I never thought of my childhood as any different, but when I think about it, I would be called names almost every day.

I developed this instant reaction, when I was being called gay, to say, “Oh no, I’m not gay!´ 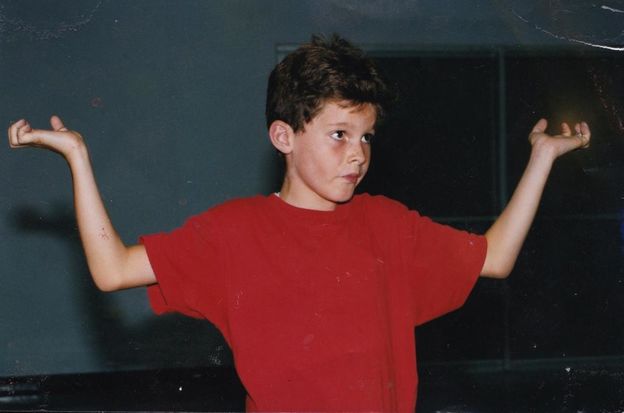 I feel like it was still as much of an issue back then, as it is now, because the root of our culture is still quite homophobic. That infiltrates into children because they’re the unfiltered bias of what we’re teaching them.

It made going to school very difficult, but it really helped me with my artistic development. I felt in order to protect myself in the real world, I had created a world that I could escape into with my art. In a strange way, I feel grateful having to go through all those difficult experiences because it makes me really human and I understand what it feels like to be bullied. (Bullying)

I had instantly reacted with, “I’m not gay,” so many times that I believed it in some way.

It stunted my development of my own sexual awareness or identification of my sexuality quite early on. I spent a long time trying to figure out who I was as a person. 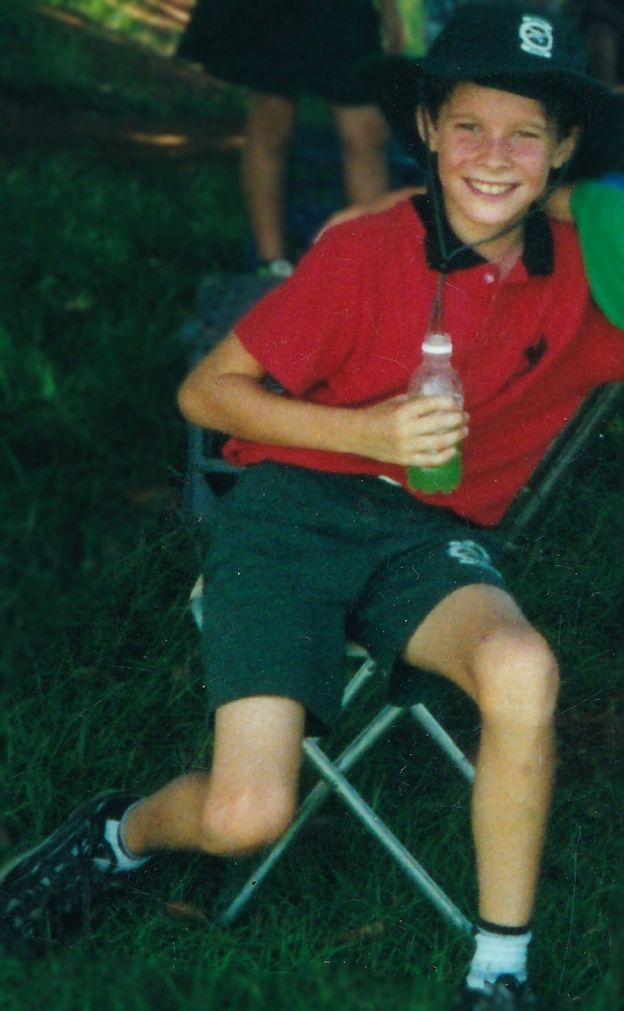 Me in Primary School

I moved to Brisbane and in high school and I had a very childlike mentality throughout. I had a purposeful ignorance because I was quite scared to even think of the possibility that I was gay.

I had girlfriends in high school and I was really emotionally attracted to them and the friendship, but I wasn’t ready to be open with myself about my sexuality. 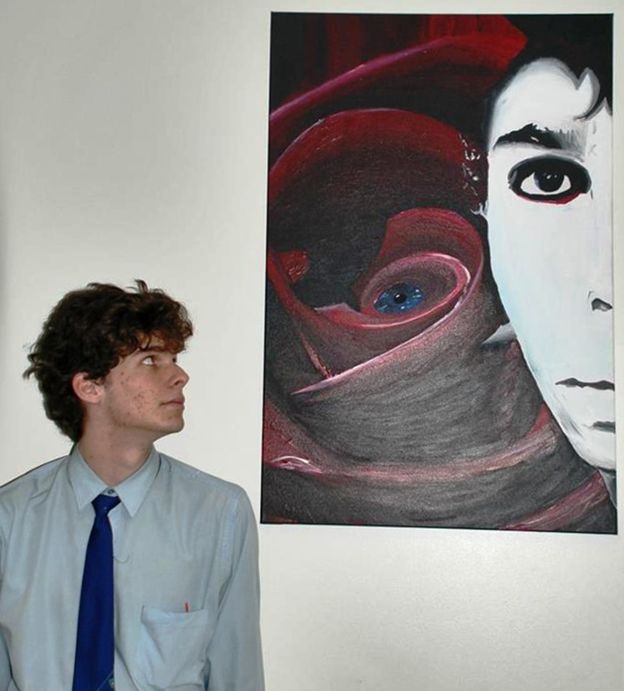 Me in high school

I do remember though, that I had a crush on this boy. But, I didn’t know if it was a crush at the time; I was just really emotionally connected with him. He’s such a beautiful person, a beautiful musician and I was so struck by his energy.

I would look at his hands, the way he played guitar, his soft personality and kept thinking, ‘oh, he’s such a beautiful person.’

I remember thinking to myself, ‘so this is a crush right?’

It was not reciprocated but I didn’t care, I just enjoyed taking it in and feeling those things.

When I look back, I am grateful for remaining more innocent for a longer period because if I came out earlier, I don’t think I would have been ready. 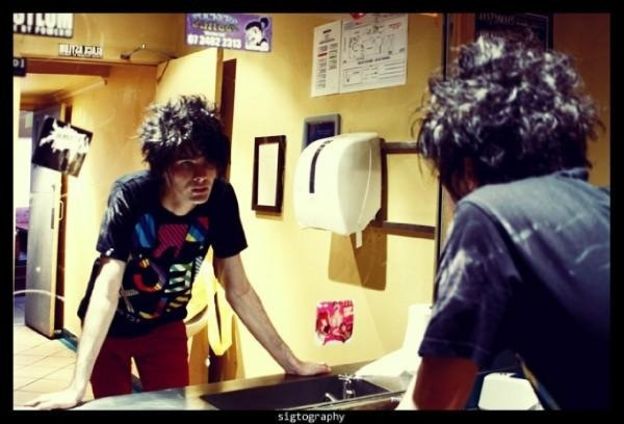 The first time I kissed a guy whom I met at a friends’ gig was amazing.

I had kissed girls before, but this was different – I felt so much more alive and I thought, ‘okay, this makes sense now!’

I came out to my mum before anyone else. It was an upsetting time that we all had to work through together. (Coming out) We then had a big chat with my dad and he was not happy at all and said some horrible things to me – “do you know you could catch HIV from just kissing boys?!”

I responded with, “Well, it’s actually extremely unlikely. Unless both of us were bleeding from the mouth.” (HIV the basics) 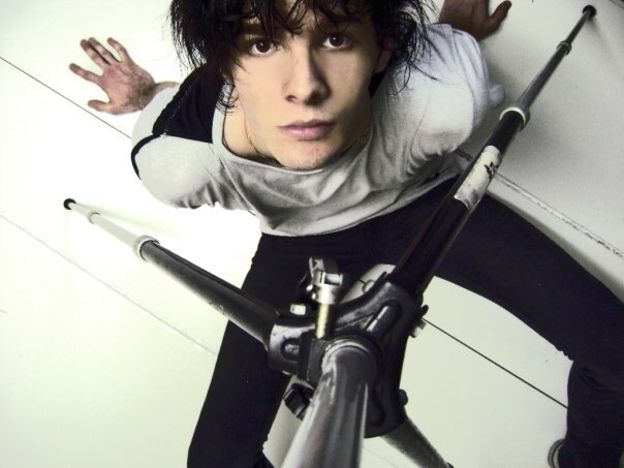 It took them a while, about four or five years before really coming round. It was a really horrible time and I can’t remember too much from it. I must have blocked it out of my memory. 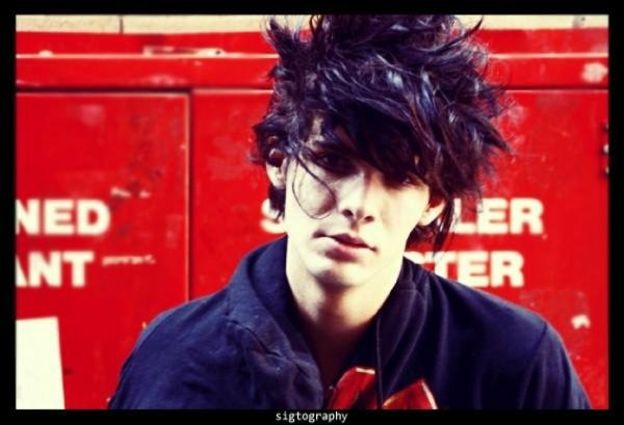 You’re Not Wearing That

5. You’re Not Wearing That

Even though my parents took a while to come around, I was unrelentlessly myself. I would do Lady Gaga covers on YouTube and even had some success in that.

I had created this amazing persona, through my art, of a diva rock star and would embody that before I left the house.

I’d create looks with lots of makeup and wear whatever I wanted to. Every time, my parents would say, “You’re not wearing that outside the house! It looks like you’re going on stage!” I would say, “No, I’m doing this.” 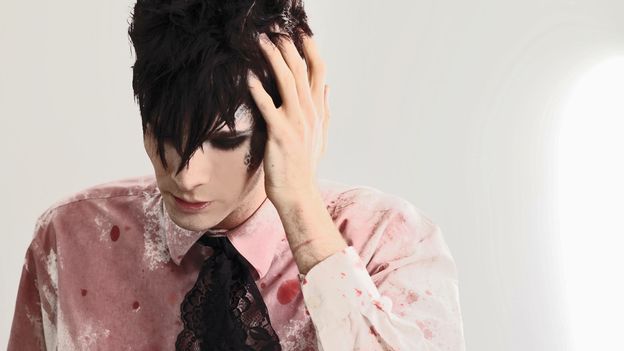 I thought I looked absolutely fabulous. 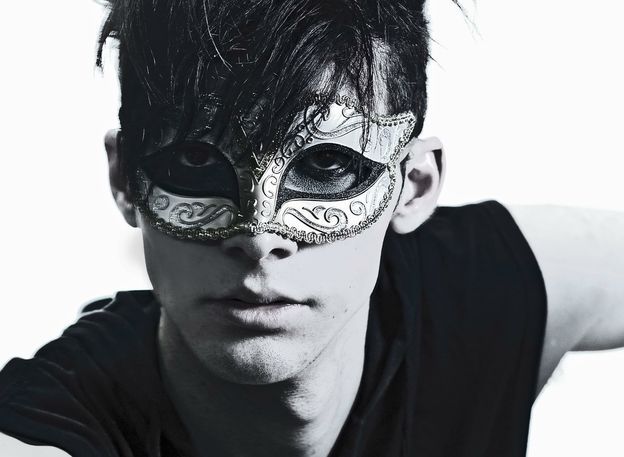 I do feel lucky that I had my art as a barrier because I didn’t feel free in the ‘real world.’ I had created a shell around my insecurities through my personas. I used music and my art to create a world of my self-expression. 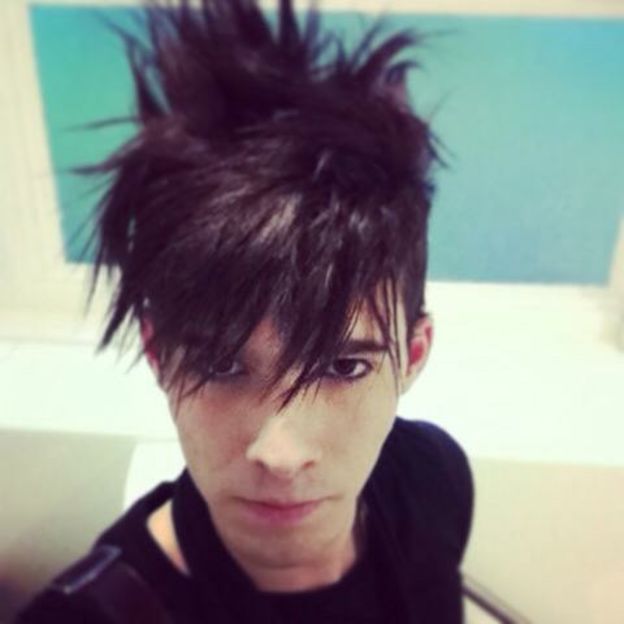 End of an Era

After I came out at 19, I still felt very much like a child and very innocent. I needed time to explore my sexuality and have different sexual relationships with people.

It took me a while to sleep with a guy.

My first time with another guy was around twenty one; it was painful, messy, uncomfortable, awkward – all those things. (First time)

I think I was also worried about catching HIV or an STI as I didn’t know much about it. Most of my casual sexual experiences involved using protection because I was really nervous about it. (STIs)

At university I studied Architecture and did music as a second degree. During the earlier years of uni, I wasn’t very close to a lot of the other students studying – I think partially because it was such a competitive course, and also perhaps I was still finding myself in some ways. 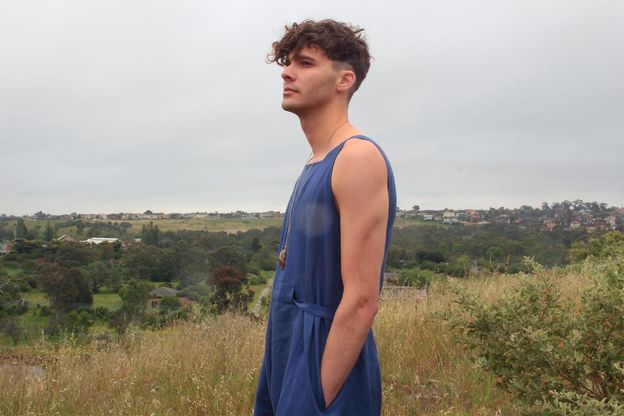 I was always drawn to the music kids because in the music world there was so much free flowing creativity expression, allowing meaningful and beautiful connections between each other.

The next five years following that period, I slowly started to become more confident as a person. As that happened, the more the persona dissolved and I felt like I didn’t need it anymore. I did less covers and started writing more of my own music. That’s when I started my new project, Youthfire, which saw the end of the “Carmichael” era of my music. Now with Youthfire, I write all my own music and I find it so refreshing to just be me.

Youthfire came about because I felt a change in my art from what I was doing before. The name actually came to me in a dream. It was so instinctive and it resonated with me so much. I just knew, that’s the name I want, that’s what it’s going to be!

When I woke up, I forgot what the name was!

I thought to myself, ‘You have to remember this name!!’

I was in the shower trying to remember it – ‘Was it “Wasted Youth”? No, surely not. That’s a horrible name! That can’t have been my revelation... Youth.... fire. 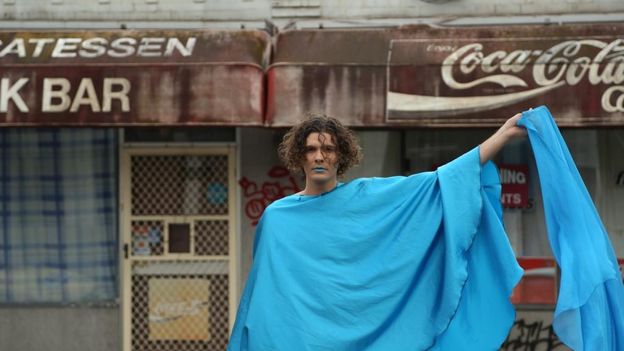 My goal with Youthfire, is for it be as intimate and honest with myself as possible.

I want to touch people deeply with my music.

I want to create an atmosphere of stillness when I play; create an energy space of love and acceptance where people can be as open to the music as possible. 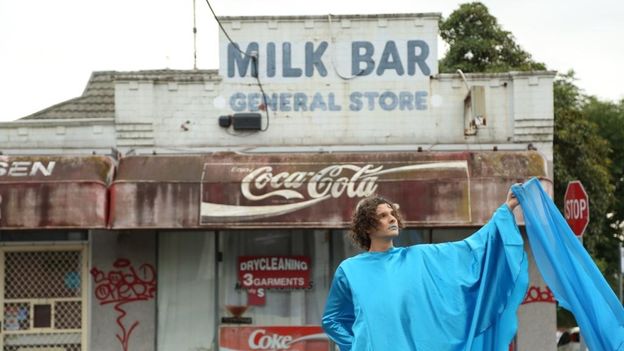 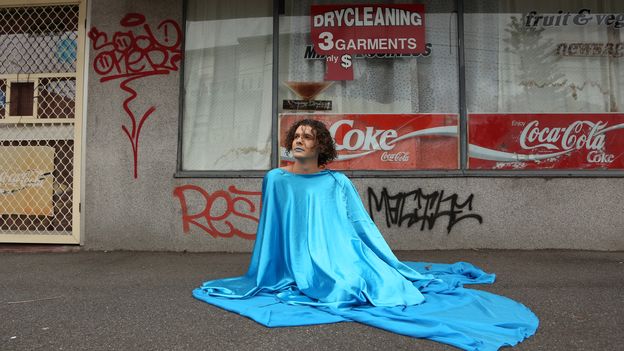 When I play, I think it’s very important to recognise the traditional owners and connection to the land, as well as ground the space we are standing on because we are drawing energy from the earth.

That is my intention with my music.

I have always felt really different – I don’t think it necessarily has anything to do with my sexuality. I do feel less like this now after having moved to Melbourne three years ago.

I feel safe to be myself without having to think about how I dress or how I talk.

I used to notice that people would stare a lot, which was perhaps heightened by my feelings of insecurity. I developed techniques to zone out so that I could avoid eye-contact in public. I’d put myself into a little bubble so I could zone out and be in my own world so I wasn’t in other people’s energy spaces. That has definitely changed now and I am not as closed off. (Self esteem)

I am twenty seven now and up until my current partner, whom I’ve been with for over two years, I had never had much a long-term relationship. I don’t think I was ready because the relationship exploration that a regular 16-year-old would go through didn’t happen for me until 19, going on 20. 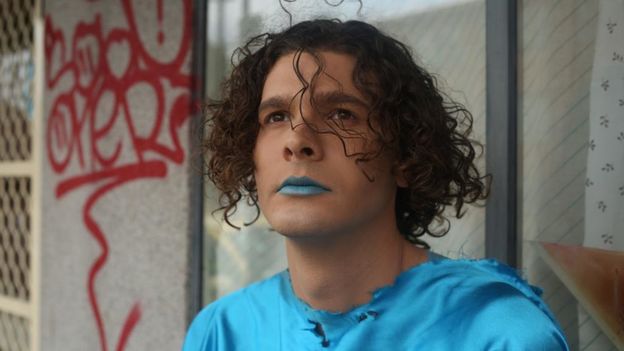 If I could talk to my six-year-old self, I would tell me;

“Don’t worry about expectations, especially the ones you are placing on yourself; take your time with coming out, you’re not wasting time – just explore it. If you see someone and think they’re beautiful inside, then allow yourself to really feel that, don’t worry about what society thinks and honour that within yourself.”