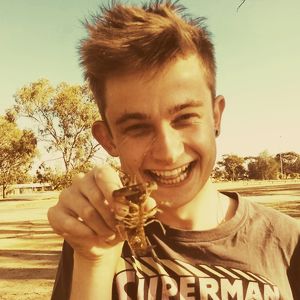 This story relates to: Bullying

I was born in Castlemaine, Victoria, but when I was about six months old, my mum left my Dad. Me, my mum, and my older sister moved to Queensland for a while. When we came back, we moved around a bit before settling in Waaia, a small town of just 70 people near the Murray River. 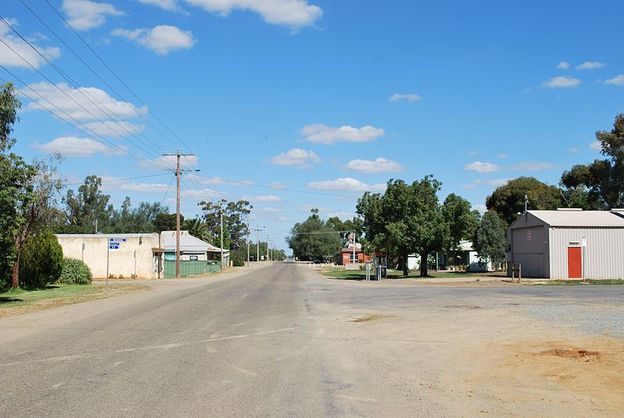 Waaia - The town near the Murray River

I went to a Catholic primary school in a larger, nearby town. I was quite a flamboyant little boy. At the time, I didn't think anything of it; in retrospect, I felt was kept at a distance from the school community. When I tried to get involved in activities or events, they’d say, "Next time, next time."

As part of primary school, our class went to church every Friday. I think because my mum was divorced, and at the time was not married to my step-father, I think there was some unspoken discrimination from the other adults at the school.

I was about five or six when my mum met my step-father, and about 18 or 19 when they split. We’ve since spoken about it, and I think it was a marriage of convenience – she wanted to study, and it was easier if she was with him. It was a bit like growing up in a single-parent family, though, because I wasn’t close with him – he was just a figure.

I went to the public high school instead of the ‘usual’ Catholic one because I wanted to get away from all that Catholic suffocation. (Religion and sexuality)

That's when the bullying and harassment became more obvious.(Bullying)

It sounds silly, but I didn't even know the word ‘gay’ until I went to high school and older boys started calling me that. 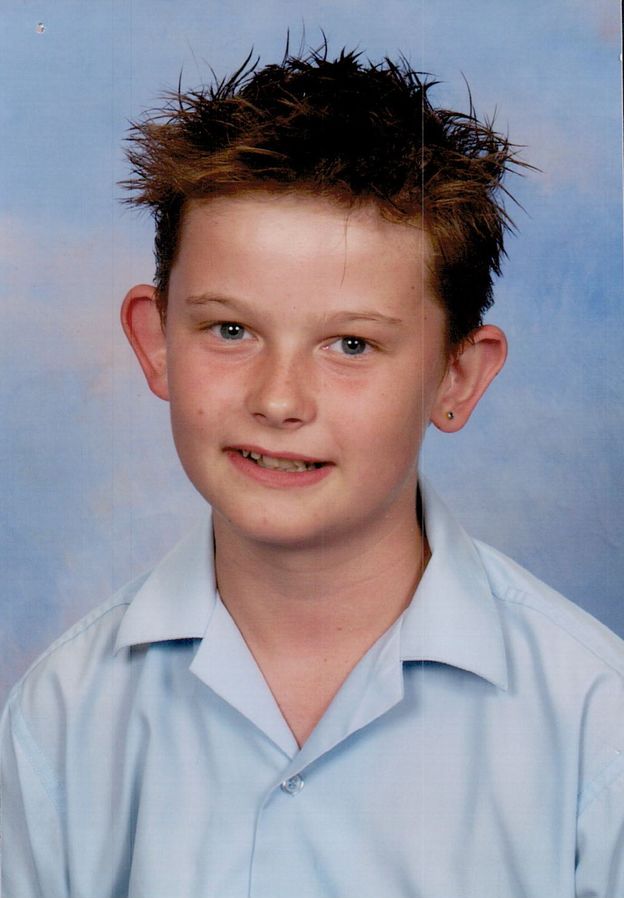 The bullying eventually became physical – people would run up and touch me on the bum.

I wanted to use the private cubicles in the change rooms because otherwise people would touch me. Once, in year 9, I was having lunch with my friends when a boy came, stood above me, and rubbed his testicles in my face.

These experiences made me feel like my body wasn't my own, like I had no personal space. I didn't try and fight back; I just stayed quiet and let it happen, or tried to remove myself from those situations.

In primary school, I’d had a close friendship with one boy that involved touching each other – it had felt totally normal to both of us – but once I started being called gay in high school, I realised the negative association that it was apparently not good to be gay.

I had a girlfriend for a week when I was 14 or 15, and it was probably the most uncomfortable week of my life.

I thought that perhaps the bullying would stop if I went out with her, but obviously it didn't. I still feel sorry for her because I was probably really nasty to her.

I felt physically threatened at school, and eventually went to the school counsellor when it became too much.

She suggested we let my mum know that I didn’t feel safe at school.

After that, my mum, sister, step-father, and I sat down and had a family meeting, which was uncomfortable. My mum asked if I wanted to move schools, but I said no – I just wanted the meeting to be over.

I went back to the counsellor alone, and she told me she had spoken to the boys who had bullied me without asking me first if I wanted her to. She wanted to have more meetings, but I didn’t go back to her again. The bullying continued.

I never socialised or went to parties, and I didn’t have Facebook because I didn't want to get harassed and bullied on social media.(Bullying) At school, I wouldn't go to the toilet because I didn't want to be there by myself. These days, I think all-gender bathrooms are wonderful and I can't wait until every building has them. I'm not trans, but I think I can relate to the anxiety of being in bathrooms with other men.

I began self-harming in early high school. I would use a mathematical compass – the ones you use to make a circle – and poke the sharp point into my arm.

I found the repetitive vibrations and the bleeding almost calming.

I enjoyed being in control of how many times I did it, and how hard.

‘ABC burns’ were all the rage in high school too – they involved scratching until you bled to make scars on your arm. I’d cover the marks with jumpers, or I’d scratch them on my leg and wear school shorts to cover them up.

In year 12, I had severe anxiety that stopped me from going to school on-and-off for about two weeks. I was really nauseous and vomiting in the morning, and couldn't stand the sight of food. Eventually, I started having suicidal thoughts.

I had the distinct feeling that I needed to kill myself. (Suicide)

I think, in retrospect, all the bullying made me feel I wasn’t significant.

Every morning I would wake up and shower, feeling really nauseous, and put on my school uniform like armour just to face the day. I’d go to school and experience those things and pretend they weren’t affecting me, laugh them off, when I was actually internalising them. I was so tired of doing that every day.

I haven't kept in contact with any of my friends from high school. I think they're embarrassed or ashamed that they witnessed some of this stuff and didn’t say anything. There was a kind of silence around it.

At my school, people mostly became builders or hairdressers, but I applied for uni because I wanted to do writing and editing, and I think I also wanted to get out of my town.

I got into RMIT in Melbourne and found a boarding house to live in. I really like the country; I just don't like the people there. It’s like they’re 50 years behind. I still find the noise of the city a bit overwhelming sometimes, but I love the diversity of the people and experiences.

Now I had left home I felt freer to mess around online. I started using chat rooms. I met a guy the same age as me online, and I didn't get murdered, which was good. (Online dating)

I was 19 at the time, and it was not the best first experience. It wasn’t quite intimate partner violence, but it was a kind of emotional manipulation. He was having his own troubles coming to terms with his sexuality. His parents weren't as accepting as he wanted them to be, and even his friends were not welcoming of that part of his life.

I used to go down to the Greyhound Hotel and see the drag shows and he'd say, "That's fucking disgusting.”

I wanted to get a tattoo of the pink triangle while we were together and he said, "You can’t get that – I’ll leave you if you get that tattoo." He was also cheating on me with lots of other boys.

While I was dating my first boyfriend during uni, I came out to my mum. I was up home for the summer and I wanted to tell her, but I couldn't physically say it, so I wrote it on a piece of paper and gave it to her.

She gave me a hug and said, "We can't tell your step-father." She was worried that if my step-father retaliated, I might go back to my self-harming behaviour. She asked if I wanted her to tell some other people in my family: her parents, my aunties, and my sister. I said, "Yes, that saves me from having to do it."

One of my close family members reacted by saying, "Why didn't you tell me?"

I'd been through 13 fucking years of awfulness, so my reaction to that was,

"Well, you never told me that you were straight. So why would I tell you that I am gay?"

Coming out to my mum was really good. She was welcoming, and wanted to know everything I had gone through. It helped me become more accepting of myself.

Eventually, my boyfriend said to me, "This is too hard, it’s just easier with girls. I think we shouldn't see each other." I said, "Okay," and that's how it ended – on the basis that he found it too hard. He wanted to stay in touch, so he would ring me and tell me about all his hook-ups. I ended up blocking his number.

There were a few random hook-ups in between my first boyfriend and my current partner, who I have been with for three and a half years. We met on Tinder, which I think is like e-Harmony for gays because, unlike Grindr, there’s a bit more work involved; you both have to first ‘like’ each other before ‘matching’! (Online dating)

We went on a date and I moved in around six months later. He is six years older than me and very stable. We have similar views on lots of things.

I also finished my Masters in Writing and Publishing. Although I’m angry about what I had to go through, and that people are still going through similar things, sharing other people's stories through editing has helped me deal with that anger. I also work in youth mental health, which I find really rewarding and fulfilling. (Mental health) 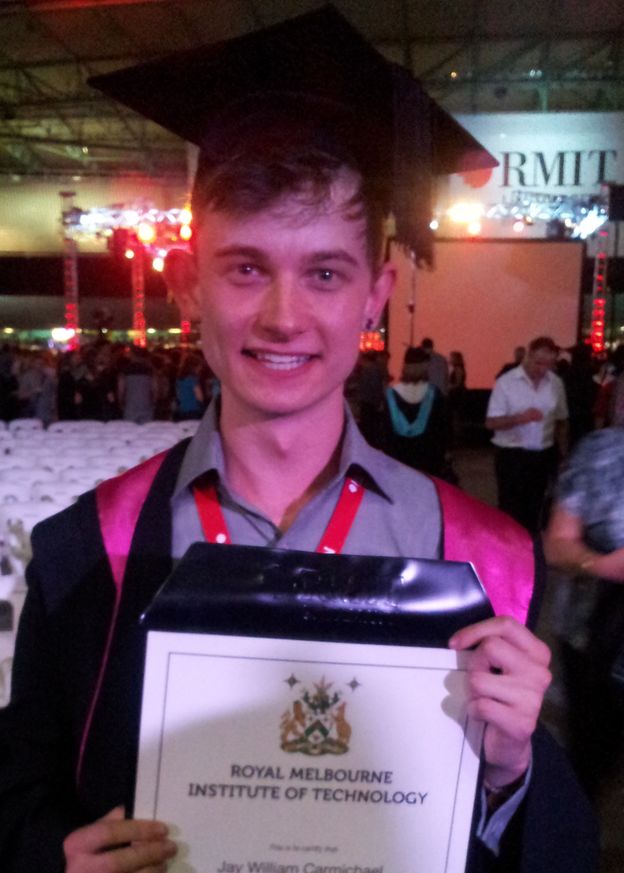 Graduating from my first degree

My advice for young people having experiences like mine is that it's okay to be who you are.

If you're growing up in a small town, use the internet to your advantage. There are some really great resources out there to show you that whatever trajectory you want to take is possible. Go searching for that information, and don't take what people tell you at face value.

I eventually got my tattoo of the pink triangle – it’s originally a symbol Hitler used in World War II to mark gay people in the concentration camps. 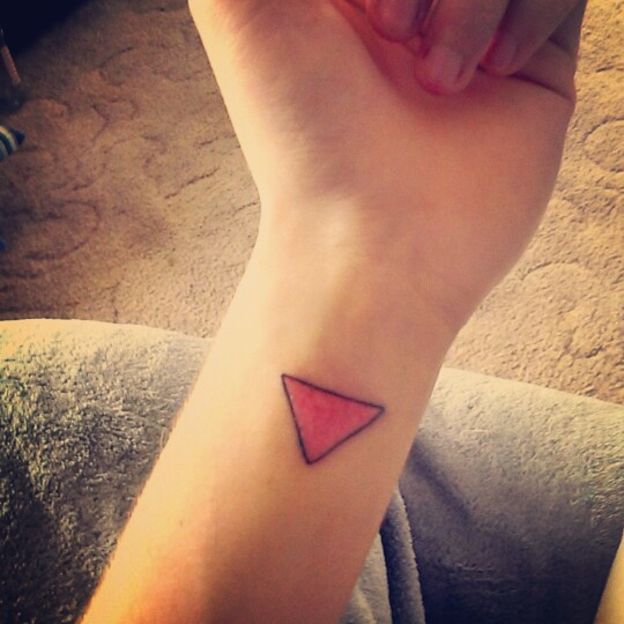 In the 1970s, the gay liberation movement reclaimed it as a symbol of pride. I like the history of it: it’s about reclaiming something that was oppressive and making it your own symbol of pride.

Symbolically, that was like my own sexuality during high school and during my first relationship – I was made to feel ashamed and not comfortable in my own body, but then came to a place where I am proud. This is who I am and that's totally fine – I don't see a problem with it, so why should everyone else?